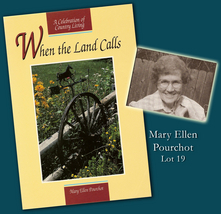 Throughout her career, she wrote extensively and was published in numerous magazines and newspapers. She also taught writing classes for local colleges, the Princeton (Wisconsin) Public Library and Kishwaukee College. In the mid-1980’s Mary Ellen and her husband, Leonard (Doc), moved to Silver Springs Lake in Neshkoro and from late 1986 until 1991, she wrote “The Rural State,” a popular, folksy column that appeared weekly in the Milwaukee Sentinal.

In 1992 Mary Ellen published a book called “When The Land Calls”, which is a delightful book of short stories and real life photos from the Neshkoro area and is based on her column “The Rural State” published in the Milwaukee Sentinel. There are many pictures, including ones of some current and former Silver Springs Lake residents, such as Mary Bellin, Don and Inez Lennartz, Ed Schaefer, George Court and Luave Ullrich. There is also a picture of our boat landing and a heron on her lawn. 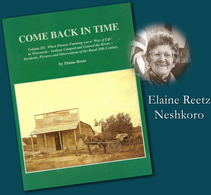 Noted historian, writer and public speaker was born on July 22, 1920. In March of 1942 she moved with her family to the Neshkoro area

In 1965 Elaine pursued her dream to be a writer. A lover of history she wrote 8 books including “The Trail of the Serpent” with the late Professor Robert E. Gard, of Madison. She also wrote “Come Back In Time Volumes I, II, and III” which contain fascinating stories and old pictures of local people, buildings, main streets, farms and stores.

She wrote for the Oshkosh Northwestern, Milwaukee Journal, Milwaukee Sentinel, Portage Daily Register, Berlin Journal and until her death the Waushara Argus and Waushara Resorter. During the 1970’s she had a program on history on the Ripon Radio Station. Elaine received numerous awards over the years and she spoke all across the State of Wisconsin. She especially loved talking to the children at the area schools.