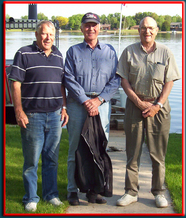 Silver Springs Lake was developed in 1974-1975 by three partners, Don Kemps, Jim Lewandowski and Milt Fischer. It was built on well over 300 acres of pasture and farm land owned mostly by Gilbert Dahlke. They were the laughingstock of the Neshkoro area because they paid so much money for his land and he could still keep his house, buildings and approximately 40 acres of land.

Pagel Construction of Almond, WI did the excavating and grading. Rice & Orth Engineering and Architects of Appleton were the surveyors. It took two summers to clear the land and excavate the lake. They finished in the fall of 1974 and in February of the following year the water began to run out of the overflow culvert. The developers were happy to see 100 acres of water rather than 100 acres of “hole in the ground”.

Click to download article below to see excerpts from an interview with Jim, Don and Milt which appeared in the Waushara Argus in 1975.